The term “inclusion” often refers to enabling people with physical disabilities to better integrate into society. Through improved transportation, alternatives to stairs to access buildings and removal of other barriers, those with physical challenges gain connections that other people may take for granted.

But how does inclusion apply to individuals living with Alzheimer’s disease and other forms of dementia? “Movie Moments at the Vogue,” a unique and first-of-its-kind event in the Bay Area, addressed that very question.

An encore “Movie Moments” event has been scheduled for Dec. 7 after a very successful inaugural event May 23 at San Francisco’s historic Vogue Theatre. The event used clips from well-loved, classic movies as a source of entertainment and an impetus for interactive discussion among participants and facilitators. It also served to reduce social stigma by bringing together volunteers, care partners, family and friends.

The free community event in May “sold out” two months in advance and had a lengthy waiting list — evidence of the ways in which it served an unmet need.

Adam Bergeron, owner and operator of the Vogue, said that “Movie Moments” was one of the most satisfying events the theater has hosted. “We consider ourselves a community-first organization, and it was a pleasure to be able to service a vibrant segment of the community that we had (previously) been unable to reach,” he said.

Inspiration for the event began in 2013 when Adriene Iverson, president and CEO of the Elder Care Alliance, and Rachel Main of the Alzheimer’s Association of Northern California and Nevada, participated in workshops presented by the I’m Still Here Foundation. The group has developed dementia-specific programs at cultural institutions across the United States and internationally.

The group’s “Meet Me at the Movies” program meshed well with a focus on improving accessibility for individuals with dementia, whether at home or in senior living communities.

Iverson noted that the concept “really clicked” for her. “It is completely aligned with the Elder Care Alliance’s vision of reducing the stigma surrounding dementia by bringing about culture change,” she said.

The “Movie Moments” event was designed, in part, to spark creative interaction for individuals with dementia, along with their care partners.

“Prior to the event, we facilitated focus groups at several senior living and memory care communities,” Main said. “Their participation and feedback played a significant role in helping us shape the content of the program.”

In addition, organizers hoped that the event would help family members, care partners and community members understand that individuals with dementia can continue to take part in meaningful conversations, sharing wisdom and communicating their feelings.

About 200 attendees enjoyed tubs of popcorn and conversation during the event, which featured scenes from eight well-known movies. As each scene ended, the volunteer moderators brought up the movies’ universal themes — including friendship, family and romance — and used movie trivia to encourage audience members to get engaged in the discussion.

An enthusiastic response to classic movies 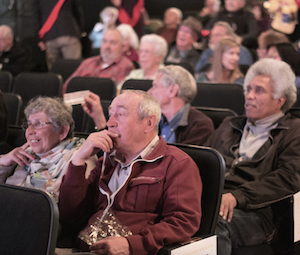 The show started with a scene from the 1952 classic “Singin’ in the Rain,” featuring Gene Kelly in one of cinema’s most-celebrated dance numbers. Following the familiar scene, the audience burst into enthusiastic applause as co-moderator Main asked, “How did watching Gene Kelly dance make you feel?” An audience member responded, “It makes me feel like I’m dancing!”

Before each scene began, the moderators encouraged participation with hints about the upcoming content. Before the show, attendees also enjoyed a montage of home movies and newsreel footage of San Francisco landmarks from the 1940s through the 1960s.

Representatives from local senior organizations who brought participants to the event noted the effects on members of their groups and their families.

“It helped loved ones feel more positive and hopeful because it demonstrated that a dementia diagnosis does not prevent a person from living an authentic and fulfilling life,” said Mindy Creson, life enrichment director for Mercy Retirement & Care Center.

“Our staff loved the way the [participants] were engaged throughout, and the selection of movie clips was excellent,” said Jen Tripathy, program director at Senior Access.

Jessica McCracken, vice president of programming and development for Ruth’s Table, said the event was a bonding experience that allowed participants to make memories together. She described one event participant who struggles with depression and isolation.

“Soon after he arrived at the theater, he completely came out of his shell,” she said. “During the group discussion, he answered the trivia questions and, with pride, shared stories from his past.”

Other volunteers and care partners described the event as magical and heartwarming. “One of the things that stood out was the diverse age range of attendees. It helped create a sense of community spirit and equality that defies the stigma of not only dementia, but aging too,” said Ruth Gay, chief public policy officer for the Alzheimer’s Association.

Added Iverson, “This experience provided care partners, healthcare professionals and loved ones an opportunity to see participants in a new light — as individuals who can contribute their life experiences and wisdom.”

For more information about the “Movie Moments at the Vogue” event on Dec. 7, visit Elder Care Alliance’s website.

Sean Caulfield is a memory care specialist with Elder Care Alliance, a nonprofit organization that has served seniors and their families throughout California for the past 110 years. Elder Care Alliance’s five communities offer a variety of services, including assisted living, memory care, skilled nursing and independent living. Caulfield organized and moderated the “Movie Moments” event with Rachel Main, family support coordinator with the Alzheimer’s Association. 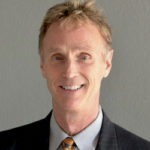