Older adults long have been a favorite target of scammers and identity thieves, and it’s a growing problem.

Consumers aged 60 or more years have made up an increasingly large share of all fraud victims over the past few years, according to an annual report from the Federal Trade Commission. In 2015, 21% of fraud complaints came from people aged 60 to 69, up from 18% in 2014 and 16% in 2013.

It’s possible that senior citizens are more likely than younger people to report scams, but the number of fraud reports isn’t really the point. More importantly, older adults and their families should know how to spot scams and avoid becoming victims of identity theft and fraud. And as someone working in senior living, you’re in a position to spread the word.

Given how much of our lives revolve around the internet, you might think the greatest threat to an individual’s personal security is an online scammer. In reality, it’s the phone that fraudsters prefer. In the vast majority (75%) of fraud complaints last year, the scammer contacted the consumer by phone, according to the FTC. Email was a distant second, with 8% of fraud complaints stemming from email contact, and 6% of fraudsters first connected with consumers through a website or some other online format.

In line with that trend, older adults most often find themselves victims of IRS impersonation scams (when someone pretending to be an IRS agent calls, asks for personal information and/or payment for a tax debt) sweepstakes scams and unwanted phone calls, according to a report from the Senate Special Committee on Aging.

After those three types of scams, seniors most often fall for a computer tech support scam. These scams generally happen in one of two ways: A scammer calls a consumer pretending to be an information technology technician for a well-known brand (such as Microsoft or Apple) and tells the consumer that his or her computer has been hacked or that malware has been detected on the machine so the technician needs to access the computer for protection. The second version of this scheme involves a consumer searching the internet for a tech support hotline and calling an impostor who set up an ad or website to lure potential victims.

Identity theft was the fifth most common scam targeting older adults, according to the Senate committee. Identity theft comes in many forms, but as far as online risks go, consumers need to be extremely careful in how and when they share their personal information.

What to do to prevent internet scams

You and your residents can do several things to protect yourselves from internet-based scams:

Although these tips apply to everyone and not just older adults, seniors and their families need to be extra vigilant, simply because scammers often target older people. And if someone falls for a scam once, there’s a good chance he or she will be targeted again.

Whether you’re looking out for your residents, yourself or your older family members, it’s important to be familiar with security threats and ways to avoid them. (Beyond practicing internet safety, you can unlist your phone number and opt out of junk mail through the Data & Marketing Association.) As part of your security protocol, remember to review your free annual credit reports for accuracy or signs of identity theft.

Christine DiGangi is a writer for Credit.com, covering a variety of personal finance topics. Her writing has appeared in USA Today, MSN, Yahoo! Finance and The New York Times International Weekly, among other outlets. You can find her on Twitter @writingbikes. 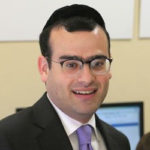 Our roles in helping older adults age in place