Chris Winkle is leaving Sunrise Senior Living after serving as CEO for the past six years, the company announced Friday. The McLean, VA-based senior living operator’s board of managers has hired Ferguson Partners to search for Winkle’s replacement, and Winkle will assist the board during the transition.

“I appreciate Chris’ many contributions at Sunrise, and especially for his leadership throughout these last several months during this most trying time of the pandemic,” Jeff Lozon, chairman of the board, said in a statement. “During his tenure as CEO, he has been instrumental in reinvigorating our growth strategy, and helped shape Sunrise as a leader of the senior living industry.”

Before joining Sunrise, Winkle was CEO of MedQuest, an operator of independent, fixed-site, outpatient diagnostic imaging centers in the United States, for eight years. Prior to that, he was president and CEO for Mariner Health Care, which operated assisted living communities, skilled nursing facilities and long-term acute care hospitals. He also formerly was chief operating officer at Integrated Health Services. Earlier in his career, he held management positions within specialty and rehabilitation hospitals.

Holder of an accounting degree from Case Western Reserve University in Cleveland, Winkle is secretary of Argentum’s board and a member of the executive board of the American Seniors Housing Association.

Hartman, who will be the foundation’s fourth leader in its 60-year history, will succeed Laverne Joseph. The foundation is a national provider of affordable housing and services for older adults, families and people with disabilities.

Hartman has almost 40 years of property management, resident services and construction experience and has served in a variety of positions during his career at RHF. He was hired in 1990 by Joseph as regional manager for the foundation’s Southern California communities. As the organization grew, so did Hartman’s responsibilities, with promotions to assistant director of management, director of housing management, vice president of housing and healthcare and senior vice president of operations, with functional oversight of affordable housing, healthcare operations, acquisitions and development.

Hartman holds a California real estate broker license and is the real estate broker for the corporation’s two property management companies. He holds a national assisted housing professional executive designation and a certified manager of maintenance designation from the National Council of Housing Management. He also is the Section 504 fair housing coordinator for RHF.

Tim Ficker has accepted the role of vice president of operations for Florida-based Cypress Living and its supporting affiliates, Cypress Cove and Cypress at Home.

Ficker brings to his latest role 25 years of experience in executive leadership in senior living, including positions with Erickson Living Communities and Shell Point Retirement Community. In 2013, he founded a consulting and coaching firm, TDF Resources, and has since served with MHS and Trilogy Consulting as managing director. Ficker also was interim executive director at University Village in Tampa, assisting in its re-emergence from bankruptcy.

Ficker earned an undergraduate degree in history and urban studies from Denison University, Granville, OH, and a master’s degree in theology from Fuller Seminary. He is a certified John Maxwell team executive coach and a certified Gallup StrengthsFinder coach.

Linda Hill has been hired as vice president of philanthropy at United Methodist Communities.

Hill has more than 15 years of philanthropy leadership experience, predominantly in the healthcare sector. She joins UMC after five years as executive director of the Raritan Bay Medical Center Foundation, which is part of Hackensack Meridian Health. She previously spent eight years in various development roles at Penn Medicine and Princeton Medical Center and three years as director of development at the Stuart Country Day School of The Sacred Heart.

Prior to her development career, Hill worked as a clinical pharmacist before launching and leading a medical communications company, WriteChoice, for 15 years.

Hill has a pharmacy doctoral degree from the University of the Sciences, Philadelphia, and an undergraduate degree in pharmacy from Rutgers University in New Jersey.

He comes from Cherrywood Pointe Investment, where he was president, and from Cherrywood’s parent company, United Properties, where he was executive vice president. Oborn also formerly was senior regional vice president of operations for Brookdale Senior Living, responsible for the operations of more than 50 independent living, assisted living and memory care communities in Colorado, Utah, Wyoming, Montana and North Dakota.

Oborn also previously served in executive capacities with New Perspective Senior Living and Silverado Senior Living and was senior vice president of operations at Sunrise Senior Living for the western division, where he oversaw more than 70 communities in California, Colorado, Arizona, Utah, Nevada, Washington and Canada. Oborn began his career with ManorCare as a licensed nursing home administrator.

Oborn earned an undergraduate degree in behavioral science and health, and an MBA, from the University of Utah.

Based in San Diego, the new team is led by David Rothschild and Mary Christian, both previously with Cushman & Wakefield. These team members focus solely on senior living transactions and have represented sellers of senior living properties across the United States, Canada and the United Kingdom since 1986. They will work closely with the senior housing and healthcare finance group and Tampa, FL-based senior housing investments sales group, as well as on- and off-balance-sheet capital partners.

Rothschild earned an undergraduate degree in economics at Lawrence University and an MBA from Arizona State University.

Christian has completed almost $9 billion transactional sales with the team during her career in senior living. She is a graduate of Vanderbilt University with a degree in psychology and minor in business administration.

The transition of ownership from President and Founder Dean Maddalena to a board of firm leaders will take place over 10 years. Maddalena, an architect and interior designer, founded StudioSIX5 in 2003.

To date, 50% of StudioSIX5 shares have been sold to four new owner members, including Principals Karla M. Jackson and John Greenless and Associate Principals Shauna Revo and Claire Richards. Each will be fully vested in five years. During that period, additional owners within the firm will be identified, and the remaining 50% of the shares will be sold in 2025 for a complete transition of leadership by 2030. 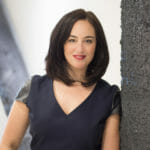