Ronald Bolding has been named CEO of Pilgrim Place, a continuing care retirement community in Claremont, CA, having just completed eight months as the interim president and CEO.

Bolding most recently was president and CEO of the not-for-profit Inter Valley Health Plan, a senior health plan headquartered in Pomona, CA, for 12 years. During that time, he provided strategic vision and expertise to this $290 million enterprise, which services more than 22,000 members.

Bolding is a graduate of Ripon College, WI, with undergraduate degrees in economics and history. Upon graduation, he entered the U.S. Navy, serving 28 years in active duty and reserve, retiring with the rank of captain. He was awarded both the Navy Commendation Medal and the Joint Service Commendation Medal.

Following his military career, Bolding worked in the management of healthcare institutions, including extensive responsibilities for infrastructure and facilities.

He is a former vice chairman of the board of Mt. San Antonio Gardens life care community in Pomona, CA, and a current board member of the Claremont Senior Foundation, among other volunteer activities.

Robbie Clausen has been named CEO of Lakeview Village, a life plan community in Lenexa, KS. He formerly was chief financial officer.

Clausen succeeds Jamie Frazier, who had been president and CEO for the past 10 years.

The new CEO has spent his entire career working in the senior housing industry. After graduating from the University of Missouri-Columbia with degrees in accounting and computer science, he began working as a certified public accountant for his father, Bob Clausen, who owned and operated assisted living communities and nursing homes, as well as home health, therapy, pharmacy and construction companies.

Heath Leuck has been hired to succeed Clausen as CFO.

He graduated from the University of Kansas with degrees in accounting and business administration. Leuck’s work experience as a CPA includes BKD (formerly known as Baird, Kurtz and Dobson), Sisters of Charity of Leavenworth Health System and CBIZ MHM financial services and business consulting company.

For the past seven years, Leuck was director of finance at John Knox Village in Lee’s Summit, MO.

Sara McVey began serving as CEO of Sequoia Living at the end of September. She succeeded David Berg, who retired.

McVey brings more than 20 years of management experience in senior living organizations to the role. Most recently, for five years, she was CEO of Horizon House, a nonprofit continuing care retirement community in downtown Seattle. Before then, she served in several executive capacities for Mather Lifeways.

In her new role, Staska-Pier provides oversight, direction and strategy to support innovation and delivery of services at the four Phoebe continuing care retirement communities.

Staska-Pier has an undergraduate degree in nursing from Kutztown University of Pennsylvania and a master’s degree in business administration from St. Joseph’s University. She is licensed as a registered nurse and nursing home administrator.

Roman will be responsible for the operations shared by Phoebe’s four CCRCs in her new role.

She began her employment at Phoebe Richland in 2000, where she served as the nursing coordinator, staff development coordinator and director of nursing. In 2011, Roman was appointed assistant nursing home administrator for Phoebe Allentown, followed by a promotion in 2012 to executive director of Phoebe Richland.

Roman has an undergraduate degree in nursing from Kutztown University of Pennsylvania and a master’s degree in business administration from DeSales University. She is licensed as a registered nurse and nursing home administrator.

Formerly, he was assistant chief for the Denver Paramedic Division.

Ajunwa comes to Loma Clara with years of experience in sales and marketing within the senior living industry.

She has more than 13 years of experience in residential community association management and has worked with condominium associations across Central Florida to improve the communities’ financial outlook, resident experience, employee growth and overall lifestyle. Before joining The Watermark at Vistawilla, Bush was onsite community manager for Condominium Concepts Management.

Bush earned her degree in human resource administration from San Joaquin Valley College in Visalia, CA. She is a Florida-licensed community association manager.

Joy Merchant has joined The Charlotte, an assisted living and memory care community owned and operated by Senior Living Communities, Charlotte, NC, as a lifestyle adviser.

Merchant joins the team with years of experience in the sales and healthcare industries.

Linda Wells has been promoted to resident care director at Wellmore of Daniel Island, owned and operated by Senior Living Communities in Daniel Island, SC.

Wells has spent her career working in the healthcare industry and will continue to make a great impact on our community. She is licensed as a registered nurse.

Also, Carley Nitchie has joined the community as social director.

Jason Hand has joined the Florida Senior Living Association as vice president of public policy and legal affairs. He will be responsible for managing the legislative, regulatory and policy activities of FSLA on behalf of its members.

Hand has 20 years of experience revolving around the creation and implementation of state policy and high-profile projects in Florida’s legislative and executive branches of government. Most recently, he was an assistant deputy general counsel for the Department of Environmental Protection, where he managed a team of attorneys responsible for the regulatory, proprietary and restoration efforts for DEP’s water programs.

Hand also served in the Florida Senate as chief attorney and lead policy analyst for the education policy committees for three senate presidents. He also brings to FSLA extensive experience in agency rulemaking and licensing, business operations and civil and administrative litigation.

Chris Egan has been named president and CEO of Kansas City, MO-based senior living marketing firm GlynnDevins. He also will join the company’s board.

Egan formerly was president and chief operating officer at Service Management Group. He gained business and leadership experience from more than 20 years of leading strategic initiatives there and at Boston Consulting Group, Intel and IBM.

Outgoing President and CEO Sue McClure joined GlynnDevins in 2011 as president and chief operating officer and was promoted to CEO in 2017. McClure recently decided to retire but has committed to remain active on the company’s board.

The 55+ practice area is led by Manny Gonzalez, FAIA, LEED AP, principal, who is focusing on the Rocky Mountain states. Gonzalez is collaborating with KTGY Principal Bill Ramsey, AIA, expanding the firm’s active adult practice in that region.

Ziemba has more than 25 years of operations and business development experience, including a long working relationship with the Sage Age team.

She formerly was the senior vice president of business development and strategic partnerships with Diakon Lutheran Social Ministries, a long-time client-partner of Sage Age.

Ziemba expects to continue working with Diakon at Sage Age.

Mark Groenheide has been appointed to the position of senior vice president, specialty, at GuideOne, West Des Moines, IA. In this role, he is responsible for expanding and managing the business by focusing on niche specialty markets and targeted distribution with opportunities for sustained profit and growth.

, West Des Moines, IA. In this role, he is responsible for expanding and managing the business by focusing on niche specialty markets and targeted distribution with opportunities for sustained profit and growth.

Groenheide joins GuideOne from HDI Global Insurance Co., where he was vice president of engineering lines North American underwriting. In that role, he was responsible for underwriting, product development, reinsurance, pricing, profit and loss, and the distribution strategy for engineering and technical lines. Before that, Groenheide held senior leadership roles with Generali and Zurich North America.

He is a graduate of the College of Charleston in South Carolina. 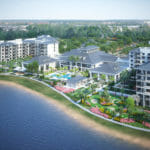