While the Tokyo Olympics are getting all the attention, residents of Emerald Court, a Kisco Senior Living community in Anaheim, CA, launched its own Olympic-style games.

A week before the 2021 Olympic games, the residents started their “Senior Olympics.” Events such as “volleyballoon,” cornhole and Wii bowling took place in the community’s courtyard. For those who preferred a less athletic competition, an intellectual option was available as well.

A few of the residents helped prepare for the games by hand-making medals to be awarded to the winners.

“One of our sales directors used to work for the Olympic committee,” said Kelsey Desmond, wellness director, “so she brought flags and pins and even a torch from the 2004 games. One of the residents that helped make the medals also won a gold, and she was so proud! It was such a fun day.”

Although this is not the first time Emerald Court has hosted a Senior Olympics, it was the first time the event was held since the start of the pandemic.

“Residents were talking about how much fun they were having competing,” Desmond said. “Even though we do a lot of these activities weekly, a lot of residents felt the extra pressure of ‘going for the gold.’ They were so excited when they made it through the hole in the cornhole, and everyone cheered.”

Finally, residents were able to gather together and let the games begin.

The schedule of the day’s events is below. 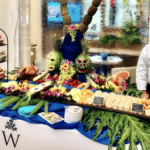