Brewing up some fun - In Focus - McKnight's Senior Living

More than 40 residents of The Fountains at Boca Ciega Bay retirement community in St. Petersburg, FL, attended a recent homebrewing class at the community and helped create a craft beer called Fountain of Youth Brew.

The homebrewing class was developed after residents expressed interest in the process. During the six-week class, residents learned about the history of homebrewing as well as the process. They also played a hands-on role in creating and bottling the beer.

“Residents were involved in the process from beginning to end,” said Melissa Krysh, community life director at the community, who helped teach the class. “They helped to boil and steep the hops, bottle the fermented beer and label the finished product. A few even shared memories of their family’s homebrewing along the way.”

The artwork on the bottle label was created by resident Stella Szemela and was inspired by her waterfront view at The Fountains community.

“It’s always great to see residents light up when they learn about something new, and this class was a perfect example of that,” Krysh said. “They had such a great time learning about the process and were thrilled to try a beer they had a hand in making, and toast with their friends at the end of the class.” 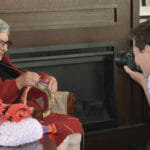