A $900 billion COVID-19 relief bill is on its way to the president’s desk after being passed by both houses of Congress by late Monday. Trade associations representing senior living operators, however, say they are disappointed in its provisions.

The measure adds $3 billion to the Provider Relief Fund, to be distributed by the Department of Health and Human Services.

“While we appreciate the inclusion of additional funding for expanded COVID-19 testing and tracing for long-term care in this latest package, the funding allocated for the Provider Relief Fund (PRF) falls woefully short of what the industry needs and what prior drafts of the legislation had suggested,” Argentum President and CEO James Balda said. “It also leaves a large sum of the PRF unassigned.”

Balda noted that some senior living providers still have not received Phase 2 funding from the PRF despite meeting all of the requirements. Operators began applying for the funds in September.

“We continue to stay focused on ensuring that HHS distributes PRF payments and sharing the urgency with which that action is needed to stave off community closures — nearly 40% have indicated they may need to close communities should their financial situation not improve,” he said.

In addition to trying to ensure that assisted living operators receive “fair distributions” from the remaining PRF monies, Balda said, “We are also urging HHS to consider additional disbursements that offer providers the ability to recoup losses from the third quarter of 2020.”

Beyond the PRF, however, he said that Argentum is “equally as disappointed” that the bill does not contain liability protections for the industry.

“We are hopeful that additional considerations will continue on a federal level, and we will continue our efforts at the state level in the forthcoming 2021 legislative sessions to improve upon the time-limited protections that we helped to enact through executive order or statute,” Balda said.

American Seniors Housing Association President David Schless said “there is much to disappoint” related to the bill and senior living.

“In addition to the package not including the liability protection the industry desperately needs, the Provider Relief Fund (PRF) grew by only $3 billion, a shocking decline from earlier reports of an additional $35 billion,” he said.

Schless also called for additional funding, noting that the $24.5 billion in Phase 3 funds currently being disbursed to providers by HHS is intended to apply to lost revenue and increased expenses from the first and second quarters.

“With the third and fourth quarters expecting to reflect significant financial stress in the industry, significantly more relief is needed,” he said. “The Provider Relief Fund is one of the few sources of financial relief available to the industry, and to not replenish these badly needed funds is seriously flawed and fails to recognize the significant work of the senior living industry to keep seniors and staff safe during the past 11 months.”

Schless said he was pleased, however, that the COVID relief bill directs PRF recipients to calculate lost revenues using the Frequently Asked Questions guidance released by HHS in June. “This preferred guidance allows the use of budgeted revenue for comparison to actual as long as the budget had been established and approved prior to March 27, 2020,” he said.

And long-term care providers can be pleased that the bill permanently extends the 7.5% adjusted gross income threshold for medical expense deductibility, Schless said.

“This is an issue that ASHA has championed for several years,” he said. “It was at risk of increasing to 10%, which would essentially be a tax increase for seniors who can use this deduction to help defray the costs of senior living and long-term care insurance premiums among other eligible expenses.”

A 2015 study by ASHA found that middle-income taxpayers, such as the residents of market-rate senior living and care communities, and especially older women with serious health conditions, would be affected by an increased threshold. A year ago, ASHA, Argentum, AHCA / NCAL and LeadingAge were among those signing onto two letters urging senators and congresspeople to make permanent the 7.5% threshold. More than 1.7 million people aged 65 or more years use the deduction, according to the AARP.

‘Congress must do more’

“Nearly two-thirds of long-term care facilities are operating at a loss, and the additional funds slated for the Provider Relief Fund for all healthcare providers in this legislation are minimal,” he said. “Hundreds of facilities are in danger of closing their doors permanently and uprooting the frail seniors they care for. Congress must do more in the new year by directing specific aid to long-term care.”

‘Mission not accomplished yet’

“Mission not yet accomplished,” she said. “This crisis is far from over, and the launch of the vaccine cannot become an excuse to walk away from older Americans. The continuing surge of infection, illness and deaths — and the unsustainable escalation of costs — means that struggling aging care providers need more testing, PPE, staffing support and money than this package provides.”

Echoing the comments of leaders of other trade associations, Sloan noted that some operators are shutting down, “and more will follow unless the next Congress steps up and provides more robust support.”

She called on the federal government to expedite relief payments, also noting that it has taken months for some providers to receive their promised funding. 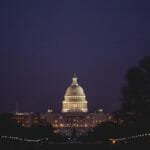