One-fourth of America’s 52 million older adults call a collective three states home, according to a ranking of states based on the percentage of their 65+ population.

Using data from the U.S. Census American Community Survey estimates, Stacker ranked all 50 states and Washington, D.C., in a “States with the most seniors” report based on the age of their populations, finding that California, Florida and Texas are the three states with the largest 65+ populations.

By comparison, North Dakota, South Dakota, Vermont, Wyoming and Alaska each have fewer than 150,000 residents aged 65 or more years, although Vermont made the organization’s top 10 list as a state with a high percentage of older adults in the overall population.

The authors noted that the size of a state’s older adult population affects the demand for resources such as healthcare, affordable housing, assisted living, in-home and nursing care, and support services. And the quality and availability of those resources help determine where older adults migrate.

“States that lure seniors tend to have beautiful weather, low or now taxes, a low cost of living, and access to top quality medical facilities,” the authors stated. “It’s no surprise then that as a share of the population, the states of Florida and Maine are bursting with seniors — nearly one in five residents are age 65 or older, followed by West Virginia, Vermont and Montana.”

Less welcoming states tend to tax retirement income, including Social Security, and have high-priced housing and steep property taxes, not to mention cold winters, according to the findings.

The 10 states with the highest percentages of older residents among their overall populations: 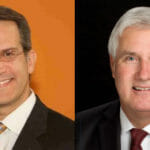