Approximately 540,000 COVID-19 antigen tests from Abbott Laboratories are “in the mail” and on their way to assisted living providers, according to LeadingAge.

Sept. 1, the U.S. Department of Health and Human Services announced that it had purchased 150 million BinaxNOW COVID-19 Ag Card tests from Abbott with the intention of distributing the tests to states and congregate care facilities, including assisted living communities, in mid-September.

LeadingAge reported that, as of Sept. 17, approximately 540,000 of the tests had been shipped to assisted living operators with Clinical Laboratory Improvement Amendment (CLIA) waivers (about 5,400 facilities), and 1 million tests were shipped to skilled nursing facility operators, based on county COVID-19 prevalence rates. Home health providers will be included on a future distribution list.

HHS and Abbott hosted a webinar for assisted living communities on Friday to explain the manufacturer’s training, introduce the test and discuss its use in assisted living. The manufacturer demonstrated the training tools available and answered questions from providers.

The federal government has not published a distribution plan, but Abbott said it will continue to send replacement kits to facilities through December. Operators will not be able to order replacement kits until later this year or early next year, however, because HHS has purchased all of the Abbott kits manufactured.

According to LeadingAge, BinaxNOW tests are intended to be used in people in whom healthcare providers suspect COVID-19 and should be given within the first seven days of symptom onset, but the tests can be used for surveillance testing, based on the Food and Drug Administration’s FAQs on testing for SARS-CoV-2. Follow-up molecular testing should be conducted in symptomatic individuals who test negative on the antigen tests.

Providers using the BinaxNOW test are required to notify public health officials of their intent to use the tests, report the results and ensure that staff members giving the tests are appropriately trained.

According to a representative from the Centers for Disease Control and Prevention on the Friday webinar, LeadingAge said, operators should prioritize testing in people who have symptoms or are high-risk, as well as those who have been exposed to the disease. Testing of all previously negative residents and staff members should be performed every three to seven days until there are no positive cases in a community for 14 days.

Any provider receiving an invoice from Abbott should not pay it, LeadingAge said. HHS is paying for the tests, and the invoices were a mistake. 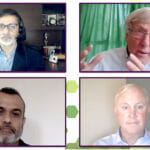