Nonprofit aging services leaders from some states hit hardest by COVID-19 shared their challenges amidst the pandemic on Friday and called out Congress for taking a summer recess.

LeadingAge President and CEO Katie Smith Sloan said older Americans “never imagined Congress would walk away from them,” taking a summer recess while they remain under “mortal threat” from the virus. She said aging service providers continue to deal with “patchwork solutions” while federal assistance is “long on promises and short on action.”

“It’s time for Congress to get back to work,” Sloan said. “It’s time to put older adults at the front of the line, right alongside hospitals, for vital resources.”

Aging services leaders form Ohio, Indiana, Missouri and Montana participated in a Zoom conference led by LeadingAge on Friday to share the staffing, testing and personal protective equipment challenges they face in their states.

Kathryn Brod, president and CEO of LeadingAge Ohio, said PPE has been a “bumpy ride” in terms of access and cost. Although the supply chain has improved from the early days of the pandemic, she said, PPE has come at a “tremendous cost” to providers. A single-use gown, Brod said, has increased in price from 25 cents to $2 — an eight-fold increase for just one item.

“In Ohio, since COVID-19’s arrival, testing has been the Achilles’ heel of all strategies,” Brod said, adding that initially the biggest challenge was scarcity of testing. Now baseline testing for all staff is presenting funding and lab capacity challenges, and testing efforts in assisted living are different than testing methods in nursing homes, creating confusion among providers. “Repeated prevalence testing — testing of all staff — is not only costly for processing, but costly from a staffing perspective, requiring staff support already stretched and in short supply.”

“Despite the challenges, we’re still here,” Williams said, “but we need to know help is on the way.”

David Trost, president and CEO of St. John’s United, a Billings, MT, provider of independent and assisted living as well as skilled nursing and continuum-of-care services, said his facility is facing a $6 million loss in annual revenue due to occupancy declines and resource limitations.

“We’ve been on our own, creating our own solutions, using our own epidemiologist and lobbying for our own support,” Trost said. “The first outbreak in our country was at a long-term care facility in Kirkland, WA. Yet long-term care didn’t receive its first shipment of PPE from national stockpiles until months later.” Those shipments were to nursing homes; assisted living has not received federal aid, other than a small number of facilities serving Medicaid beneficiaries.

“This lack of attention on long-term care facilities greatly contributed to a spike in long-term care deaths. If CARES [Coronavirus Aid, Relief, and Economic Security] Act funds were deployed in parity with hospitals from the onset, I would ascertain we would be in a far different place today,” Trost said.

Eric Essley, president and CEO of LeadingAge Indiana, said that along with the PPE shortages, staffing challenges and cost increases, facilities now are focusing on schools reopening and outbreaks affecting mothers and fathers who are long-term facility caregivers.

“They are one shift away from not being able to come to work and support the folks they are caring for,” he said.

Anderson said his facility is on track to spend almost $1.5 million on staff testing. And although he’s been told it’s a reimbursable expense, he has yet to see that reimbursement and is concerned it may not come to fruition.

“We’re taking on the front-end expense,” Anderson said, noting testing involves not only the cost of the test, but the labor involved in administering the tests. “I’ve not seen evidence we will be fully reimbursed for these expenses.”

Williams said liability insurance is becoming an issue. Some facilities are pulling staff members to create isolation units to care for COVID-19-positive patients from hospitals and other facilities.

Without a national testing strategy, Sloan said, every state has had to figure out a strategy on its own, leading to inconsistencies from state to state, and sometimes inconsistencies within a state. 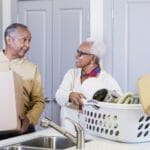