The framework for a bipartisan $908 billion COVID-19 relief package, released Wednesday, includes measures directed at addressing the struggles of assisted living and other long-term care operators.

It also includes a directive to the Department of Health and Human Services to consider an “appropriate” distribution of funds for providers underrepresented in previous allocations, as well as those at risk of imminent closure.

The lawmakers said they hope the framework will become legislation that can be attached to an annual spending bill. Congress is rushing to meet a Friday spending bill deadline to avoid a federal government shutdown.

“We are encouraged that the bipartisan agreement framework, for the first time, recognizes some of the essential needs of assisted living communities,” Argentum President and CEO James Balda said. “So many providers across the industry are still awaiting financial relief, and this additional funding will go a long way in supporting their ongoing operational needs to care for some of the nation’s most vulnerable citizens. But it is needed now.”

Balda pointed to a recent survey of Argentum members showing that almost 40% of respondents have four months or less of operating expenses, and almost half indicated they will have to close some communities if their financial situation does not improve.

American Seniors Housing Association President David Schless echoed that the senior living industry needs help now, adding that ASHA also is calling for temporary and limited liability protections for the industry “given the likelihood of legal challenges ahead that will create additional, unnecessary and unfair financial strain on this industry.”

A spokesperson for the American Health Care Association / National Center for Assisted Living told McKnight’s Senior Living that Congress needs to pass another coronavirus relief package that prioritizes vulnerable older adults and their caregivers in long-term care facilities, giving them “a fighting chance.”

A LeadingAge spokeswoman said the bill, as currently framed, provides relief on many fronts that will help aging services providers and the older adults they serve. The proposed extension and expansion of the Paycheck Protection Program is “a positive step,” according to the organization.

“Aging services providers across the board need access to either a first and / or second loan, which this bill framework appears to provide,” LeadingAge said. “However, we urge policymakers to allow larger nonprofit operators access to PPP dollars — the current framework is limited to smaller businesses with 300 or fewer employees.”

LeadingAge noted that the framework omits many relief measures it views as important, including relief for Housing and Urban Development-assisted affordable senior housing providers.

“As Congress negotiates funding for state and local governments, we urge lawmakers to ensure that funds can easily be allocated to providers of aging services, through direct grants, worker pay, payment for testing or PPE, or other needed supports,” the spokeswoman noted. 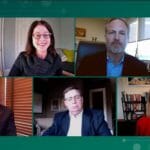 ‘We can no longer ignore this’: Affordable long-term care is urgent priority, panelists say