The REIT now has a 100% ownership interest in the communities, management of which it previously said would be taken over by Des Moines, IA-based Life Care Services.

Brookdale and the REIT are jointly marketing for sale additional entry-fee CCRCs.

“This transaction also reduces our lease exposure, improves our consolidated cash flow and increases our liquidity and financial strength,” Brookdale President and CEO Lucinda “Cindy” Baier said in a statement. “This set of transactions is another example of our ability to unlock significant value while reducing the complexity of our business,” she added.

Brookdale’s news Monday followed a Jan. 22 announcement by National Health Investors that Brookdale had exercised its option to purchase eight assisted living communities in three states from the REIT for $39.26 million. NHI previously had classified these communities, which have a combined total of 336 units, as assets held for sale. 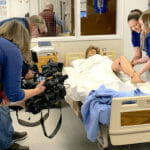