Occupancy in continuing care retirement communities fell 1.4 percentage points from the fourth quarter to 84.3% through the first quarter of 2021, according to data released Friday by the National Investment Center for Seniors Housing & Care. 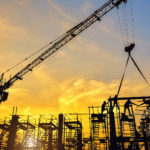