It may come as no surprise that Florida is the state with the largest percentage of adults aged 65 or more years in 2017, according to new population estimates released Thursday by the U.S. Census Bureau.

The mix of Sunshine State residents included 20.1% older adults, the numbers show. Perhaps more surprising is that Florida is followed by Maine (19.9%) and West Virginia (19.4%). Maine also saw its median age increase from 42.7 years in 2010 to 44.7 in 2017, the bureau said, making it the state with the highest median age.

A majority of counties in the country continue to grow older, according to the population estimates. The nation as a whole experienced a median age increase from 37.2 years to 38 years from 2010 to 2017.

“Baby boomers and millennials alike are responsible for this trend in increased aging,” said Molly Cromwell, a demographer at the bureau. “Boomers continue to age and are slowly outnumbering children as the birth rate has declined steadily over the last decade.”

In March, the bureau said that older adults are projected to outnumber children in 2030 for first time in U.S. history. Twenty percent of Americans are expected to be of retirement age. By 2060, according to the bureau, the median age of the U.S. population is expected to be 43 years, up from 38 years today. 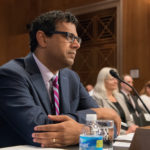