Two former employees of a Chicago independent and assisted living community have been charged with stealing more than $300,000 from a former resident living with dementia.

Tameeka Wolfe and Christina Wright, the former business manager and activities director, respectively, at Symphony Residences of Lincoln Park, each were charged last week with financial exploitation of an elderly person, a felony, according to media reports.

Wolfe and Wright allegedly stole $136,900 and $205,197, respectively, from resident Grace Watanabe by either transferring money from her account to theirs or by writing themselves checks from Watanabe’s account without permission, the Chicago Tribune reported.

The two are among five former employees of Symphony Residences of Lincoln Park named in a civil lawsuit last year that is ongoing.

Symphony previously said that it had retrained its employees on policies related to accepting gifts from residents; some of the checks allegedly had “Happy Birthday” or “gift” written on them. None of the employees allegedly involved in the incidents involving Watanabe’s funds work for the facility anymore, according to the company. Watanabe, now 98, lives elsewhere now.

In a Facebook post Tuesday, the Office of the Cook County Public Guardian, which now has guardianship over Watanabe, said it was pleased that charges had been filed by the Cook County State’s Attorney’s Office. Altogether, according to the public guardian, $750,000, Watanabe’s entire life savings, has been stolen.

“We are litigating a lawsuit against Symphony and its employees to recover Ms. Watanabe’s money. We have been urging the State’s Attorney’s Office to file criminal charges since the police completed their investigation in February,” the post said. “Criminal prosecution of the offenders, in addition to recovery of the stolen money, is important to achieve full justice for Ms. Watanabe.” 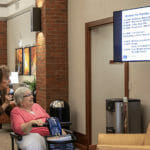