More long-term care workers than not are getting vaccinated against the flu, but they are less likely than other healthcare workers to get the shot, according to new data released Thursday by the Centers for Disease Control and Prevention.

The vaccination rate among those who work in long-term care settings (including assisted living) was at 68% in 2016-2017, according to the data, published in the “Morbidity and Mortality Weekly Report.”

That’s lower than the rate for those who work in hospitals (92%) and ambulatory settings (76%), however. As in previous seasons, the CDC said, coverage among healthcare workers was highest among workers who were required by their employer to be vaccinated (97%) and lowest among those working in settings where vaccination was not required, promoted or offered onsite (46%).

The CDC recommends that all healthcare personnel receive annual flu vaccinations to reduce flu-related death among themselves, their colleagues and those for whom they care.

Flu can be deadly for those aged 65 or more, Kathleen M. Neuzil, M.D., MPH, director of the Center for Vaccine Development at the University of Maryland School of Medicine, said during a Thursday press conference organized by the National Foundation for Infectious Diseases.

Older adults have two options for flu vaccinations, a high-dose vaccine that has been shown to improve the immune response in older adults, and an adjuvanted vaccine, which has an additional ingredient to boost the immune response, Neuzil said. The CDC does not favor one over the other.

Pneumococcal vaccination also is important for adults 65 and over, Neuzil said. Seniors only need to get that shot once. 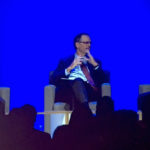 Gingrich: Look to alternatives to immigration for workforce solutions