The Medicare program made approximately $3.3 million in overpayments to Brookdale Home Health for claims that were incorrectly billed for home health services provided to assisted living residents and others, the U.S. Department of Health and Human Services Office of Inspector General said Monday in releasing the findings of a compliance audit.

The agency is recommending that Brookdale return to the Medicare program funds related to claims that are within the four-year reopening period.

The audit covered a sample of 100 claims out of 3,512 involving more than $13.9 million in Medicare payments to Brookdale for home health services provided in 2016 and 2017. Independent medical reviewers looked at the claims to determine whether the services met coverage, medical necessity and coding requirements.

The HHS OIG said that Brookdale did not comply with Medicare billing requirements for 46 of the 100 home health claims reviewed. “For these claims, Brookdale received overpayments of $132,500 for services provided during our audit period,” stated the 60-page report, issued under Amy J. Frontz, deputy inspector general for audit services in the HHS OIG. Based on the sample, the agency estimated that Brookdale received approximately $3.3 million in overpayments for the period covered by the audit.

“Brookdale used its medical review team to review the claims we questioned and challenged our independent medical review contractor’s decisions, maintaining that nearly all of the sampled claims were billed correctly,” the HHS OIG said. “To address its concerns, we reviewed Brookdale’s claim rebuttals and considered the opinions of its medical review team. However, we maintain that our findings and recommendations are valid, although we acknowledge Brookdale’s right to appeal the findings.”

In addition to returning the funds, the HHS OIG said, Brookdale should try to find and return any additional overpayments that may have occurred as well as strengthen its procedures to ensure that Medicare beneficiaries qualify for the services provided and that beneficiaries are receiving only “reasonable and necessary” skilled services. Brookdale disagreed with the recommendations, according to the report.

A Brookdale spokeswoman told McKnight’s Senior Living that the company had no comment beyond the information contained in the report. The full report, including comments from Brookdale, is viewable here.

Release of the audit findings comes on the heels of Brookdale Senior Living announcing an agreement to sell its majority stake in Brookdale Health Care Services — provider of home health, hospice and therapy services — to HCA Healthcare for $400 million. The move is designed in part to position Brookdale’s core senior housing operations for sustained growth, the company said last week. 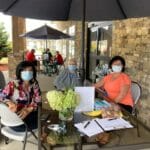