Online caregiver training platform CareAcademy admits there is no silver bullet when it comes to solving the home care industry’s worker shortage. But Senior Vice President of Marketing Aaron Dun told McKnight’s Home Care Daily his company has some not-so-secret weapons at its disposal to reach its goal of training up to 1 million care workers in the next two years.

The five-year-old Boston, MA-based company provides online training for care workers at approximately 1,000 home care and home healthcare agencies across the U.S. So those workers have completed roughly 1 million classes.

“We have a number of courses we are making available through our customers to get someone who’s never done (these jobs) ready to work in the home,” Dun said.

Training caregivers for the estimated 7.4 million direct care jobs the nation will need to fill by the decade has been a central issue for the Biden administration’s American Jobs Plan. Groups representing senior service providers, including LeadingAge, have called for strengthening federal investment in competency training and offering a career pathway for home care and home healthcare workers.

Dun said CareAcademy has been connecting to policymakers in Washington about provisions in the plan related to training. At the same time, he said the company is also proactively developing partnerships with universities, such as Southern New Hampshire University, to offer accredited courses that could be used as college credit toward a nursing degree.

“As an agency, being able to offer that kind of incentive helps bring new people into the fold, as well as giving their caregivers upscale pathways to continue to improve their skills and credentials,” Dun said.

One of the biggest challenges for home care providers operating in multiple states is the myriad different training and certification requirements. CareAcademy has a coded system that assigns workers to training programs in their individual states. Although some large home care firms have been promoting the idea of uniform certification across all states, Dun thinks that is highly unlikely in the short run.

“There is so much disparity between the states,” Dun said. “Some of that is geographical, some of that is the political leanings of the different states. While we would agree there is a certain amount of utility for having a universal set of standards, I think that feels a long way off.”

Last month, CareAcademy formed an advisory board, which includes leaders from Visiting Nurses of New York and policy experts on the home care industry. Dun said bringing together various thought leaders will help CareAcademy ensure that it is meeting the training needs of the home care industry and help the platform develop ways of attracting the next generation of caregivers. 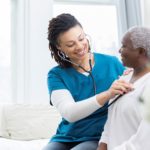