Both Humana and Encompass Health disclosed major changes at the top of their home care businesses Monday.

Humana is now on the hunt for a new president of its Home Business, after it promoted former division president Susan Diamond to Chief Financial Officer. Diamond had been serving as both interim CFO and segment president of Humana’s home care division.

“Susan is a seasoned and experienced financial executive with extensive knowledge of our business, including deep operating experience from her leadership of key areas of our retail business, and most recently, her leadership of our Home Business, growing it into the largest offering of its kind,” Bruce D. Broussard, Humana’s president and chief executive officer, said in a statement.

Diamond joined Humana in 2006, serving in various leadership roles. Most recently she led the company’s $5.7 billion acquisition of Kindred at Home — the largest acquisition in Humana’s history. She has also led subsequent deals to help move the Louisville, KY-based company further into the home care segment.

Diamond will also be part of an Office of Home Solutions along with members of the home business team to maintain focus and continuity as Humana builds out and transforms its home health business.

“Crissy’s more than 25 years of financial advisory and accounting experience combined with her deep understanding of the business and the industry make her ideally suited to take on the CFO role,” Encompass President and CEO Mark Tarr said.

Carlisle has been with Encompass since 2005. Her promotion comes one week after Encompass named Barbara Jacobsmeyer CEO of the company’s home health and hospice unit. 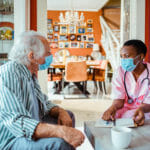