It may be quite some time before the three Insignia Senior Living communities on Puerto Rico have fully recovered from Hurricane Maria. Staff, residents’ family members, neighbors and friends are making a difference, however, a company spokesperson tells McKnight’s Senior Living.

Maria, which made landfall on the island Sept. 20 as a Category 4 storm, knocked out power across the entire U.S. territory. As of Oct. 3, the death toll on the island is 34. Insignia’s three assisted living and memory care communities there — Miramar Living in San Juan, with 68 residents; Residence in San Juan, with 42; and Villa Serena in Guaynabo, with 37 — were not immune from the effects of the wind, rain and lack of electricity.

Insignia also operates six senior living communities in Georgia, but “unlike in Georgia, where we can drive our residents to shelter in other cities, there is nowhere to evacuate to when you live in an island,” spokesperson Carolina Ortiz-Rosso said.

Company owners and executive team members already had moved into Miramar Living, and Residence and Villa Serena agreed to shelter a total of 13 new residents before the hurricane hit. “Some of them are still living with us today,” Ortiz-Rosso said. 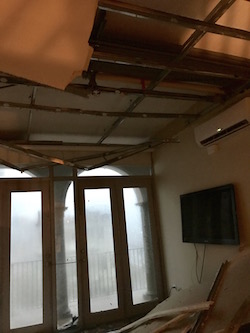 During the storm’s peak on the island, the ceiling of the third-floor living room at Miramar Living collapsed (pictured in the accompanying photo). Residents were moved away from their rooms to a hallway with no windows. “The elevator wasn’t safe, so residents who weren’t able to walk had to be carried down the stairs,” Ortiz-Rosso said.

Challenges continued after the storm passed.

“Since Puerto Rico is accustomed to power outages due to storms and poor infrastructure, electric generators are quite common,” Ortiz-Rosso said. “Without power, locals turn to diesel to provide electricity. But after Hurricane Maria, diesel distribution was rationed for medical and emergency uses only.”

Residents’ family members and friends put their connections to work to obtain additional fuel for the communities. Insignia executives also placed phone calls when possible — phone and internet reception was limited, met with Federal Emergency Management Agency officials and other government officials, and sourced trucks and containers. After days of effort, the company secured more diesel for its generators. 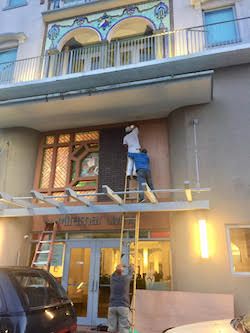 Ortiz-Rosso said the entire experience has made Insignia’s communities “stronger than ever.”

“Sometimes it takes natural disasters and catastrophes to bring neighbors and friends together and to show how genuinely good humans can be,” she said.

With limited power, water, food and gas, staff members are finding new ways to cook meals, save electricity and water, and entertain residents.

“Our life enrichment directors are hosting bingo, movie afternoons and other fun activities in order to keep things flowing as they usually do in all our communities,” Ortiz-Rosso said. “Meals are being served in the dining rooms, music is being played and residents are keeping to their usual daily routines as closely as possible.”

Many associates and executives experienced personal losses in the storm, she said.

“Many are coming with their children, grandchildren and even pets, because they have nowhere else to take them. We have habilitated bedrooms for our caregivers to sleep in so that they don’t have to waste gas and our residents can have the care that they need,” Ortiz-Rosso said.

The company has posted information on its website for people interested in helping those affected by Hurricane Maria.