A bill signed into law by Oklahoma Gov. Kevin Stitt on Monday is designed to slow the overprescribing of antipsychotic drugs to residents of assisted living communities and other long-term care facilities.

Under the bill, a resident’s family would be notified if a loved one is prescribed an antipsychotic medication or if the resident has any adverse reactions to such prescribed medication. The bill also requires monitoring for adverse effects, staff training on side effects and the adoption of documentation standards to deter abuse related to such medications.

“House Bill 1877 will bring important protections and transparency regarding antipsychotic use in assisted living communities,” LeadingAge Oklahoma Executive Director Mary Brinkley told McKnight’s Senior Living. “The bill includes requirements regarding appropriate use of PRN [as needed] antipsychotic medications to monitor their impact on the residents and their quality of life.”

Antipsychotics often are used off-label to try to reduce agitation and other behaviors in residents with dementia. Studies, however, have found that their use can contribute to accelerated cognitive decline and an increased risk of stroke, pneumonia and death.

In a statement before House Bill 1877 was signed into law, Coleman noted that the passage of Senate Bill 142 two years ago “led to a significant drop in their misuse” in nursing homes. The new law affecting assisted living communities, he said, “will ensure that a resident’s family is told when their loved one is prescribed these types of drugs and know of any adverse reactions so they can make informed decisions about their care moving forward.”

The most recent legislation was supported by the Oklahoma Assisted Living Association, the Alzheimer’s Association of Oklahoma and the state long-term care ombudsman, among other groups. 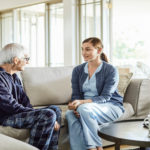