Safety, efficacy and the newness of the COVID-19 vaccine, as well as distrust of the government, were among the major factors that long-term care and other healthcare workers cited as reasons for not receiving a coronavirus vaccine in a recent survey.

As of early March, just over half (52%) of such staff members — including 50% of employees in assisted living communities and nursing homes — said they had received at least one dose of a COVID-19 vaccine; 42% had received both doses of a two-dose vaccine. Among assisted care and nursing home workers, 15% indicated that they had scheduled or planned to receive a vaccine, 11% had not made a decision, and 24% said they did not plan to be vaccinated.

Vaccination rates were particularly low among long-term care and other healthcare workers who were Black, worked in lower-paying jobs or had attained relatively less education. Those findings came despite such workers being prioritized for vaccination in every state.

Less than half of Black (39%) and Hispanic (44%) healthcare workers reported receiving a vaccine, compared with 57% of white workers, mirroring disparities found in vaccine uptake rates among the national adult population.

Of frontline healthcare workers who said they had received a COVID-19 vaccine from an employer, 90% worked in assisted care communities or nursing homes, compared with 93% of those who worked in hospitals, 79% in doctor’s offices or outpatient clinics and 69% of home health workers.  The vast majority of the workers (70%) who were able to get vaccinated through their employer said that vaccination was easy to schedule.

Concerns about vaccine safety and effectiveness were major factors in why some frontline healthcare workers said they had not received a vaccine.

Among the nearly half of healthcare workers who had not received a vaccine, 82% said that worries about potential side effects had stopped them, whereas 81% said they were taking a wait-and-see stance because the vaccine is “too new.” Approximately two-thirds (65%) said that distrust in the government to ensure safety and effectiveness of the vaccines was a major factor in their decision.

A task force of behavioral science experts looking into vaccine hesitancy among senior living and skilled nursing staff members encouraged operators to focus their efforts on the “movable middle” by making vaccination easy, building trust in vaccine safety and offering incentives for vaccination.

LeadingAge also recently hosted a town hall in partnership with the Black Coalition Against COVID to address staff vaccine hesitancy.

According to the CDC COVID Data Tracker, 2.7 million residents and staff members in assisted living facilities and nursing homes have been vaccinated. 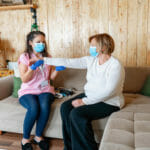