McKnight’s has been serving the market for 40 years. Some might consider that a rare achievement. Leah Klusch might see it as a good start.

For more than five decades, this nurse from the Buckeye State has distinguished herself as a speaker, educator, consultant and occasional consigliere. She is the executive director of The Alliance Training Center in Alliance, OH.

Thanks to her tireless efforts, many thousands of long-term care professionals now do a better job of doing their job.

Leah has been quoted frequently in McKnight’s news stories. She also has presented at more than 20 McKnight’s webinars on a wide range of topics. These include the Minimum Data Set, the Patient Driven Payment Model, PEPPER (Program for Evaluating Payment Patterns Electronic Report) reports, compliance, competencies, operational strategies and improving quality care.

Less than two years after earning her nursing degree, Leah was hired to work in a small town’s nursing home. She was appalled by the resident suffering and minimal oversight that prevailed. But rather than make an exit from the field, she decided to make a difference. Klusch soon began developing educational tools that improved care delivery, assessment processes and documentation formats.

“That has driven much of my career for over 53 years,” she noted.

The journey may have been a bit more winding and arduous than she originally anticipated. But the payoffs have been rewarding as well.

“I do not have a job – I have always had a mission – a dedication to excellence and person-centered individualized care,” Klusch said.

Added Sheridan: “She is an example who seeks to make doing the right thing always something all in LTC do and know.”

You can read more about Leah’s professional journey here. 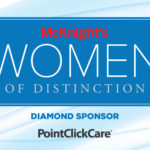