The biggest announcement during Sunday’s opening session of the LeadingAge annual meeting involved the new name put forth for continuing care retirement community—life plan community (see this article for more information)—but the session held much additional news as well.

On many people’s minds was the impending departure of LeadingAge President and CEO Larry Minnix. Minnix is retiring at the end of the year, and Katie Smith Sloan will succeed him. “This I know for sure: We will miss Larry and his incredible impact, and his contributions to this field will endure,” said David Gehm, whose term as board chair is ending. “But I also know this: the future couldn’t be brighter as we look at Katie and her leadership, partnering with our board and our state partners and all of you to transform the aging experience in America.”

Tuesday’s general session will include a tribute to Minnix.

Marty Walsh, mayor of Boston, told the gathering at the Boston Convention and Exposition Center that the city was joining the Dementia-Friendly America initiative. Walsh received a citation from Gehm for all of the city’s efforts to make Boston “age-friendly.” “In the end, a city that works for seniors is a city that works for everyone,” the mayor said.

Attendance at this year’s meeting is 8,500, Walsh said, noting that LeadingAge had held its meeting in Boston 23 years ago but hadn’t been back since because it outgrew the Hynes Convention Center.

“Technology doesn’t help you do your job better,” Coughlin said. “Technology fundamentally changes the job you do.” Attendees should demand technology that serves their needs, not have to conform their jobs to existing technology, he said. Those who work in aging services, he said, “own the future of living longer better.” 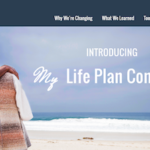