Ohio hit the pause button two days into a statewide saliva-based testing initiative at all licensed assisted living communities in the state after “testing data inconsistencies” at some communities.

The directors of the Ohio Department of Aging and Ohio Department of Health sent a letter to the state’s assisted living administrators on Wednesday stating that they were initiating a “review to evaluate the results” of the tests, and that the results would not be reflected in testing data on the state’s long-term care facility dashboard until an analysis is complete.

The letter instructed communities that received results to follow established Centers for Disease Control and Prevention protocols based on those results but said that testing is not moving forward at this time.

“As you are well aware, each COVID-19 test result has a significant impact on the life of both the tested individual, as well as those around them (family, co-workers, healthcare professionals),” reads the letter from Ohio Department of Aging Director Ursel J. McElroy and Health Department Interim Director Lance Himes.

“The false positives were a massive problem because they result in employees being removed from work, residents being quarantined, everyone being subject to additional testing, etc.,” Van Runkle said. “A lot of distress, wasted time and cost.”

LeadingAge Ohio President and CEO Kathryn Brod said she, too, was “pleased” with the decision to halt testing.

“There were many false positives across the state that were causing disruptions of care,” Brod said. “They have proactively communicated with the associations the work they’re doing to get their arms around where the problem might be.”

Ohio Assisted Living Association Executive Director Jean Thompson said false positives can have a “traumatic effect” on a community due to the notification requirements to residents, staff and families.

“We need to be able to rely on a test being reliable,” Thompson told McKnight’s Senior Living. She said some OALA members began testing arrangements with labs prior to the state order and were paying out of pocket, but providers would not be able to sustain the frequency of testing called for by the state.

Testing with the NovaDX Laboratories saliva test began Monday at some of the state’s assisted living communities, according to the Cincinnati Enquirer. The California-based laboratory came under scrutiny in Texas after several nursing homes reported false positives among residents in June. At the time, state health officials determined that the tubes used to transport samples to the lab were the cause of the faulty results. 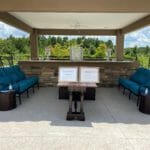