Former Florida assisted living and skilled nursing facility owner Philip Esformes has been sentenced to 20 years in prison for his role in a case that the federal government continues to describe as “the largest healthcare fraud scheme charged by the U.S. Justice Department.”

Prosecutors were seeking a sentence of at least 30 years, but U.S. District Judge Robert N. Scola Jr. said he considered Esformes’ philanthropic efforts over the years, the Sun Sentinel reported.

“The vast majority of the money he made, he made legitimately,” he said. “More importantly, he was a true friend to people known and unknown to him, and that is worthy of mitigation.”

Esformes was found guilty in April of more than 20 charges of money laundering, paying and receiving kickbacks, bribery and obstruction of justice. In July, Scola ruled that he had to forfeit his interest in seven operating companies related to his facilities.

The federal government in part originally had alleged in 2016 that Esformes would move skilled nursing residents to his assisted living facilities when they were at or near the end of Medicare’s 100-day post-hospital benefit period for skilled nursing. “After the required 60-day waiting period between consecutive admissions to an [sic] SNF, a physician or physician assistant would readmit the beneficiary to the hospital, re-initiating the cycle,” according to a federal motion.

The scheme allegedly occurred from approximately January 2002 until around June 2016.

In 2017, the government added bribery charges to the charges against Esformes.

Thursday, Scola said that the Esformes-led scheme resulted in losses to the government of $4.9 million to $8.3 million. The government originally had valued the losses at more than $1 billion.

Esformes told the court on Thursday that he accepted responsibility for what he had done, saying he had been “reckless” and “arrogant” but now was a “humble and broken man.”

The court still must determine the amount of restitution Esformes will pay, as well as property he will forfeit. Those matters will be decided at a Nov. 21 hearing. Prosecutors have asked that he pay $207.4 million to Medicare and Medicaid and forfeit $38.7 million, an amount equal to his personal benefit from his actions, they said.

Deputy Special Agent in Charge Denise M. Stemen, of the FBI’s Miami Field Office, said Thursday that Esformes was “a man driven by almost unbounded greed.” He used proceeds from the scheme to buy luxury automobiles and a $360,000 watch, according to government officials.

Among others charged related to the scheme, physician assistant Arnaldo Carmouze previously pleaded guilty to conspiracy to commit healthcare fraud and was sentenced in April to 80 months in prison and ordered to pay more than $12 million in restitution.

Former hospital outpatient director Odette Barcha also pleaded guilty to one count of conspiracy to violate the anti-kickback statute. She was sentenced in April to 15 months in prison and three years of supervised release and was ordered to pay more than $700,000 in restitution.

Bertha Blanco, a 30-year employee of Florida’s Agency for Health Care Administration, which oversees the licensure of assisted living and skilled nursing facilities in Florida, was sentenced to almost five years in prison in December 2017 for accepting bribes in exchange for providing confidential information to operators, including Esformes. She reportedly provided advance notice of surprise inspections. 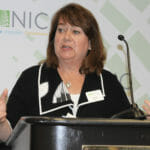 Industry will need to get creative to address middle market needs, groups suggest at NIC meeting