Residents of Brookdale Senior Living, Touchmark and other senior living communities are helping researchers improve their understanding of cognition and brain health.

In one study, residents from Brookdale Senior Living communities throughout the country are using a tablet-based app called Adaptive Cognitive Control Trainer, from Neuroscape at the University of California, San Francisco, to potentially improve their brain health. The app focuses on three key aspects of cognition: attention, goal management and cognitive flexibility. Another app, MeditTrain, is an immersive meditation app designed to improve attention and limit distractions.

Neuroscape at UCSF, a multidisciplinary research center working to bridge the gap between neuroscience and technology to optimize brain function, received a National Institutes of Health grant in 2018 to test the feasibility of using remote digital technologies in senior living communities across the country.

A chance meeting with the senior director of life engagement and innovation at Brookdale led to the company’s residents participating in the study, and Neuroscape continues to recruit participants from any senior living community.

For the study, participants use an app three times a week for four weeks for approximately 25 minutes per session. They also will complete surveys and use another app before and after the assigned intervention to measure which aspects of cognition, if any, improved.

The Adaptive Cognitive Control Trainer app, on the surface, is a game, but the back end uses algorithms created over the past 10 years that have been shown to be effective in working specific parts of the brain involving cognitive control.

Joaquin Anguera, Ph.D., the study’s principal investigator, told McKnight’s Senior Living that the first part of the study involved focus groups through Longevity Explorers, a San Francisco area group of older adults who evaluate design apps for technology. The pandemic paused the second year of the study, which re-launched in April with Brookdale residents at 75 various communities testing the redesigned apps.

“It’s just looking at the feasibility of who’s going to use it, will they use it, do they enjoy it and is there any benefit of doing this in the first place?” Anguera said, adding that the ultimate goal of the research is to conduct a much larger pilot study to determine who wants to use the technology and to understand what is effective in increasing adherence and attrition.

The current trial is limited to people who have iPads or access to an iPad. Originally, the grant was designed to have someone on-site to provide some training, but the pandemic led researchers to pivot to see how feasible it would be to have older adults use the app with the least amount of assistance possible.

Senior living providers interested in participating in the trial can email Neuroscape or visit the website for more information.

The study — one of several aimed at helping older adults live independently longer —  monitored 14 volunteers doing various everyday tasks in their Seattle senior living communities. WSU researchers have been following the residents — some with mild cognitive impairment or dementia — since 2011.

The researchers are using a new algorithm developed in 2020 —  Behavior Change Detection for Groups — to analyze data from noninvasive technology, such as motion sensors.

The algorithm allows researchers to quantify behavioral differences in performing activities of daily living with the goal of eventually enabling the technology to detect early symptoms of cognitive decline, respond and treat the condition earlier, according to Diane Cook, Ph.D., of the WSU AI Laboratory and head of the Center of Advanced Studies in Adaptive System, or CASAS, smart home project.

WSU also has an ongoing research project with residents at Touchmark on South Hill in Spokane, WA, that is using wearable technology combined with smart home technology to examine multiple chronic health conditions. Cook and her team received a five-year, $1.77 million National Institute of Nursing Research grant in 2017 for the research.

Using smart home sensors and health monitoring technology, the goal is to identify health events for adults with chronic conditions and potentially extend the functional independence of older adults. 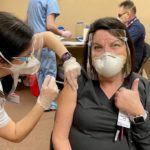