As the damage from Hurricane Matthew is assessed and flooding in the United States continues — on Monday, the Weather Channel said that at least 26 people were killed in the United States, which fared better than Haiti, where approximately 1,000 people have died — senior living communities are giving thanks for one another. Below are some of their stories.

Affinity Living Group’s McElveen Manor, an assisted living and memory care community in Sumter, SC, on Wednesday accepted 18 residents who were evacuated from the Evergreen and The Palmettos assisted living communities in Charleston (the latter is part of National HealthCare Corp.), as well as their staffs and some family members, The Sumter Item reported.

The South Carolina Department of Health and Environmental Control provided cots and helped with food and bathing facilities, according to the media outlet, and McElveen Manor provided new pillows.

At the time the article was written, the community was planning to potentially welcome 25 more temporary residents.

Some residents of Franke at Seaside, a Lutheran Home of South Carolina community in Mt. Pleasant, and staff members — in all, almost 200 people — were evacuated to sister community Heritage at Lowman in White Rock, according to television station WBTV. Other residents found shelter with family members in safe locations.

The temporary residents were housed in an auditorium and in a wing of the skilled nursing center area, according to the media outlet. Executive Director Don Wilson was hoping to transition the visitors to their regular homes as early as Saturday, WFSU said.

Westminster Woods also sent residents to communities in Georgia as well as Orlando and St. Petersburg, FL, according to the media outlet.

To ensure that the needs of senior living residents are met during natural disasters, LeadingAge Florida President and CEO Steve Bahmer is serving on a newly formed Post-Hurricane Recovery Best Practices Task Force in Florida.

The task force will offer recommendations to local government officials with the goal of improving the community’s preparedness and response to hurricanes and other severe storms. Recommendations will focus on improving organizational structure, including establishing a clear chain of command, implementing a comprehensive emergency management plan with coordination between the county and city, improving communications with the public and prioritizing services to those with the greatest need, according to LeadingAge Florida.

“In the wake of Hurricane Hermine — a storm which left more than 100,000 Tallahassee-area residents without power — LeadingAge Florida worked with Gov. Scott as well as with county and city officials during and after the storm to assess its impact on aging services providers in the affected area and the recovery efforts that would be necessary,” Bahmer said. “I was in frequent contact with our mayor and city commissioners, urging them to prioritize senior care communities in their efforts to restore power to the city.” 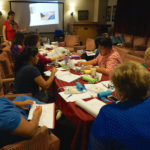