“Is there anything we can do to be of support?”

That question from Goodwin House CEO Rob Liebreich to the head of a local early childhood educational program led to the creation and widespread sharing of a COVID-19 business playbook to help other businesses and organizations through the pandemic.

Goodwin House, a senior living provider that operates two life plan communities, home health and hospice services in northern Virginia, had been through the struggles to acquire personal protective equipment, the increase in operational costs, the communication efforts to keep residents and staff updated, and the infection control battle to keep the virus out of its facilities.

Tammy Mann, Ph.D., president and CEO of the Campagna Center in Alexandria and a trustee of Goodwin House, was working to reopen her childcare program when she started talking with Liebreich about testing protocols, PPE and communication. Goodwin House’s medical director and nurses helped the center establish a testing regiment, which helped the childcare facility identify an asymptomatic case and work with their team and parents to keep children safe.

“Out of that conversation came a true interest to be of support to other organizations beyond senior living,” Liebreich told McKnight’s Senior Living. “Over the last seven months, as the pandemic has come about, our sense is that we are truly all in this together. Anything we can do to be stronger together, we need to take action above and beyond just looking out for ourselves.”

Lindsay Hutter, Goodwin House’s chief strategy and marketing officer, said the organization realized that it had developed more than 225 different protocols during the pandemic. The idea was to create a template of those protocols and make them “off-the-self adaptable” to schools, restaurants, businesses and other senior living providers as a safe operations, human resources and communications resource.

“We had a view internally of having lived it on the front lines, the conversations taking place, as well as the service delivery to other individuals in their homes that helped us recognize we had a treasure,” Hutter said. “If it could help more, all the better.”

The playbook was released in early September and has been downloaded by other senior living organizations, schools, churches, chambers of commerce, county departments of health and even the National Geospatial Association.

Some of those organizations reached out to Goodwin House with help in connecting to testing laboratories and PPE suppliers. And Goodwin House representatives will be participating in a webinar later this month with the Northern Virginia Hospital Alliance to share lessons from the playbook.

Goodwin House now is working on a new version of the playbook and expects to release it in early November.

Liebreich said he hopes the success of the playbook spurs other providers to share their expertise and experiences. 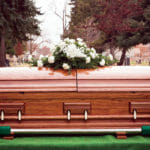 30 percent of COVID deaths in long-term care have occurred in assisted living: study