Senior living workers and residents should be part of the initial phase of distribution of vaccines against SARS-CoV-2 when they become available, the National Academies of Science, Engineering, and Medicine advise in a report released Friday. The recommendation maintains one made in a draft report released in September.

The final report from the Committee on Equitable Allocation of Vaccine for the Novel Coronavirus recommends a four-phase approach. High-risk health workers, including senior living workers, and first responders are in the report’s Phase 1a “Jumpstart Phase.” Older adults living in congregate or overcrowded settings, as well as anyone at higher risk for illness due to co-morbid conditions, are part of Phase 1b.

The early phases of the committee’s proposed framework emphasize “prevention of severe morbidity and mortality” and maintaining essential health and emergency services. In later phases, the focus shifts toward reducing transmission. The committee, according to the report, based its approach on each group’s risk of acquiring infection, risk of severe morbidity and mortality, risk of negative societal impact, and risk of transmission to others.

Older adults and those with chronic conditions, Argentum President and CEO James Balda said, are “extremely vulnerable to the harmful effects of COVID-19” and require prioritization in vaccinations, as do the frontline workers who care for them.

“We remain optimistic that the committee’s recommendations will be implemented in [the Department of Health and Human Services’] final vaccine allocation plan,” Balda said. “Importantly, however, we need to ensure senior living communities have the resources available for the administration of vaccines, and we will continue to ask HHS for additional financial support for these measures.”

Argentum and the American Seniors Housing Association had submitted comments in response to the draft released last month, supporting the prioritization of senior living employees and residents and requesting more specificity in the final report to ensure that they were included in the stated groups.

The draft had mentioned assisted living in the context of including frontline healthcare workers in the first phase of vaccination to reduce their risk of spreading the infection, as well as protecting staff members at high risk for severe illness and death due to comorbid conditions and age. And the draft proposed that older adults living in congregate care and long-term care settings — citing nursing homes or skilled nursing facilities as examples — be included in Phase 1b of vaccine allocation.

ASHA President David Schless, who participated in a public forum when the draft report was released, said he is encouraged that senior living residents and workers are included in the first phase of vaccine distribution.

“We will continue to monitor further advancement of a vaccine prioritization strategy to ensure the full spectrum of senior living residents and staff have access to a vaccine when available,” he said.

Similarly, LeadingAge provided oral testimony and submitted written comments on the draft report. LeadingAge noted that the final report does not specifically list affordable senior housing or independent living communities, but the nature of these communities, which primarily house older adults, “should qualify both of these settings for prioritized vaccine access.” 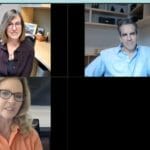 ‘Ugly period’ of pandemic is over, but ‘COVID hangovers’ will persist: panelists