Ten thousand steps per day often is cited as a desirable fitness goal for adults in general and is the default goal in many wearable fitness devices, but a new study finds that older women can see mortality benefits from taking fewer steps.

Investigators from Brigham and Women’s Hospital found that, among older women, taking as few as 4,400 steps per day was significantly associated with lower risk of death, and risk of death continued to decrease with more steps taken but leveled off at around 7,500 steps per day.

“Clearly, even a modest number of steps was related to lower mortality rate among these older women,” said I-Min Lee, MBBS, ScD, an epidemiologist in the Division of Preventive Medicine at Brigham and Women’s Hospital. “We hope these findings provide encouragement for individuals for whom 10,000 steps a day may seem unattainable.”

The team also found that for women who walked the same number of steps per day, the intensity of their walking — how fast or slow they walked — was not associated with risk of death.

The investigators reached their conclusions after analyzing results from 16,741 women who wore a research-grade wearable device on their hips for seven consecutive days during all waking hours and then followed up for approximately four years. The women’s ages ranged from 62 to 101 years, and the average age was 72.

The results were published Wednesday in JAMA Internal Medicine. 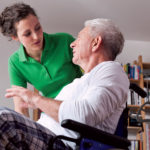 ADL, cognitive needs higher for home health recipients in assisted living than in other settings