Use of touchscreen computers with interfaces tailored to residents’ interests and abilities can result in a clinically significant decrease in the use of antipsychotic drugs among those with dementia, according to a small study. Use of the technology also had positive effects on behavioral episodes, stress and depression, and it resulted in some residents regaining some cognitive function, said the researchers. 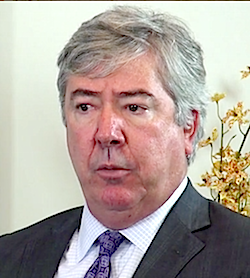 “To see a clinically significant drop in the utilization of these drugs is very exciting and important,” said neuropsychologist Scott Sautter, Ph.D. (pictured), an associate professor at Eastern Virginia Medical School and principal investigator for the study, known as the Birdsong Initiative. “Antipsychotics can produce side effects such as blurred vision, drowsiness, muscle spasms and even cause diabetes and weight gain. If behavioral episodes can be affected in positive ways and without using what we call ‘pharmaceutical restraints,’ it greatly enhances life for those with dementia and opens new possibilities for them.”

The study was conducted in June through December by the nonprofit continuing care retirement / life plan community Westminster-Canterbury on Chesapeake Bay in Virginia Beach, VA, in conjunction with Eastern Virginia Medical School and Virginia Wesleyan College, both in Norfolk. It was funded by a $228,000 donation from Westminster-Canterbury Foundation board member Sue Birdsong and her husband, George.

Thirty-one residents of the Hoy Nursing Care Center, Westminster-Canterbury’s healthcare wing, used the bedside technology in the 24-week study. Their dementia made it difficult to participate in social activities. The technology, developed by Colorado-based It’s Never 2 Late, offered Skype, social networking and content.

Another 31 residents with dementia underwent routine personalized therapeutic recreation programs that were non-computerized. Halfway through the initiative, the two groups switched therapies, so that by the time the study concluded, all of the participants had used the computers.

At the project’s completion, researchers found a clinically significant reduction of antipsychotic drug doses among 40% of those in the intervention group who had been taking the medications throughout the study. Eighty-six percent of participants who were continuously taking antipsychotic medications decreased their use to various degrees.

In addition to the medication decrease, organizers of the Birdsong Initiative noted other positive outcomes: “The findings are game-changers, and our Hoy Center residents surprised us by how they embraced the technology, far more than any of us guessed,” said Westminster-Canterbury CEO Ben Unkle (pictured). “They used the computers with student interns guiding them for five hours a week. To our astonishment, they also utilized the computers on their own nearly 31 hours weekly on top of the intern-assisted time. This flies in the face of conventional thinking that people with dementia can’t learn and enjoy new things. It goes to show how much potential there is for addressing their disease and improving their lives through creative, nonpharmaceutical approaches.”