SeniorAdvisor.com has released its Best of 2016 Awards, honoring those operators that have received high marks on the Austin, TX-based online ratings and reviews site.

Brookdale has the greatest number of winning sites on the list, at 85. Of the 10 providers that have the most communities on the list, Spectrum Retirement has the highest percentage of its properties meeting the award criteria, at 68%. The entire top 10 list appears in the accompanying graphic.

To be eligible for the honor, operators must have maintained an average overall rating of at least 4.5 out of 5 stars from reviewers and must have received at least three reviews in 2015, according to SeniorAdvisor.com. To be included on the site to begin with, they must provide at least one of the following types of care, services or housing: independent living, assisted living, memory care, low-income seniors housing, home healthcare or skilled nursing. 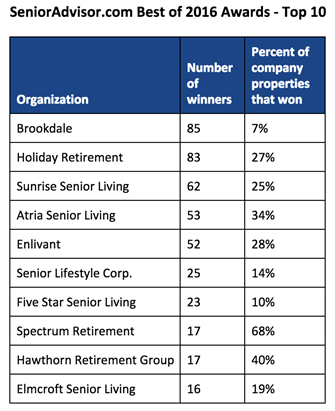 More than 1,000 senior living care, service and housing providers in the United States and Canada are recognized on this year’s list, the third one produced by the site. This is the first year that Canadian communities are recognized.

“The numbers have grown every year that we’ve done this,” SeniorAdvisor.com President Eric Seifert tells McKnight’s Senior Living. “We’ve actually made the requirements stricter each year, and despite that, the number of communities that are achieving this award has grown substantially over the past three years. It’s doubled since the first year.” The increase reflects well on operators and caregivers, Seifert adds.

More than half of the award winners offer more than one type of care, services or housing. The assisted living category is the most represented on the list, with almost 60% of winners offering it. Memory care is the next highest offering, being provided by 50% of award winners, and independent living is offered by 44% of winners. Home healthcare saw the highest increase in number of winners this year, with more than six times more winners than in last year’s awards.

The top three U.S. cities with the most assisted living winners were San Antonio; Tucson, AZ; and Charlotte, NC.

Seifert shared with McKnight’s Senior Living insights into common qualities among winners and tips for securing good online reviews from residents and their families. Read them here.