A intervention recently pilot-tested in private-pay home healthcare settings one day might help improve coordination of care, reduce hospitalizations and improve caregiver retention in assisted living, according to the study’s leader.

Over six months, caregivers at 22 Right at Home home health agency franchises were required to indicate changes in the status of those in their care by calling or using a ClearCare app when they clocked out at the end of their shifts.

“As they’re clocking out, they receive a series of questions about the care recipient,” Grabowski told McKnight’s Senior Living. “Did they seem different? Was there a change in skin condition or toileting? We go through a series of questions, and if they end up indicating any changes in condition, that triggers a task in the ClearCare platform that then goes to the care manager for that local agency, and then that care manager attempts to review the change in condition.”

In some cases, the care manager might respond by contacting a family member, following up with the caregiver, visiting the care recipient to see the problem firsthand or encouraging a family member to make a doctor’s appointment, Grabowski said. “The hypothesis is that by noting these changes in real time and then managing them before they escalate, we can prevent some inappropriate healthcare use,” he added.

Changes in clinical status during the study period occurred in 2% of all caregiver shifts and affected, on average, 2% of care recipients, according to the researchers. The majority of changes were in behavior (17%) or skin condition (16%), followed by changes in eating or drinking behavior (14%) or the ability to stand or walk (9%).

Although the study partners did not include any senior living operators, Grabowski said that the intervention could be “a really nice complement” to care coordination efforts in senior living settings, particularly assisted living.

“Every senior living community that I’ve been in, there’s certainly lots of home care that’s going on,” he said. “Sometimes that home care company is owned by the senior living company and they deliver that care internally; sometimes they have a number of different companies that are coming in and caring for residents within their community. But the idea that you would have some sort of ability to immediately, in real time, detect a change in condition and then potentially act on that change could be really powerful. You could imagine an assisted living provider also being notified when there’s a change in condition and having their own ability to go down and see what’s going on. The potential for management and contacting family and addressing these kinds of changes is even more pronounced for those residents receiving home care in assisted living relative to those out in the community.”

In an era of staffing recruitment and retention challenges, another potential positive aspect of the tool for assisted living providers, Grabowski said, is that direct caregivers who used it said they felt empowered.

“Nobody really knows these care recipients better than the ones providing the care, yet I don’t think we’ve always thought to engage them in the process,” he said.

Many caregivers using the checklist in the pilot test, Grabowski said, told researchers, “ ‘For the first time, I really feel like I’m a part of something bigger. I can see how the care that I’m providing fits into this bigger picture, and when I say there’s been a change, somebody listens to me and it gets acted on.’ I think there’s a real sense of empowerment here that we can also learn from, whether it’s this intervention or others.”

The findings of the pilot test were published online Aug. 10 in the Journal of the American Geriatrics Society. The researchers are following up that study with a randomized controlled trial of the checklist in the home care franchises, Grabowski said.

Older adults who ultimately may benefit the most from the intervention, according to the researchers, are those with chronic conditions such as diabetes, neurologic disorders or cardiovascular disease, because seemingly small changes in condition could lead to bigger health issues if not addressed.

Assisted living Lois A. Bowers Medicare
Next post in News 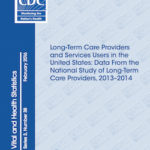