It remains to be seen whether the assisted living industry’s successful lobbying for COVID-related financial relief and testing from the federal government will result in more federal regulation. The pandemic already has aroused interest in senior living from two U.S. senators and one congresswoman, who introduced a bill earlier this year after soliciting information from 11 senior living companies about the extent of the coronavirus in their buildings and the actions they took to prevent or mitigate the disease.

National Center for Assisted Living Executive Director Scott Tittle, however, said Thursday that he and the organization’s board members do not regret seeking federal assistance.

“I was really proud of our board early on in the pandemic, because we talked to them about what’s to come potentially with the receipt of federal funds,” he told McKnight’s Senior Living. “They really took a stand and believed that we need to do what’s best for the sector now to help people get the resources that they need to fight the battle and help save lives and help protect staff, and that if those questions were to come, then we certainly would be prepared to discuss them at that time.”

The aid certainly was — and is — needed, Tittle said, adding that success in obtaining resources also has been due to the efforts of fellow trade associations and the groups’ collective members.

“AL has really suffered the same, in many ways, challenges that other providers in the continuum of long-term care have suffered, whether it be through workforce challenges, operational challenges, finance challenges, and just battling a virus that we can’t identify where it is without adequate testing,” he said. “And really the lack of available and needed PPE has certainly been top of mind for everybody. …The ability for AL operators to continue to persevere during this time, it’s just been really incredible to watch.”

The executive director said he has not heard of any specific calls for any additional changes in regulations related to assisted living, although he knows it’s a possibility. “We look forward to seeing the outcome of the elections and then working with the new Congress to see what we may be able to do by way of addressing any questions,” he said.

With elections of a president, senators and congresspeople less than three weeks away, Tittle said the overall results may be more telling for the assisted living industry than solely who ends up in the White House.

Tittle also was among those speaking Thursday at a general session of the American Health Care Association / NCAL Annual Convention & Expo, held virtually this year due to the pandemic.

NCAL Board of Directors Chair Helen Crunk told attendees that she remains committed to working to keep regulation of the industry at the state level.

Also at the general session, AHCA/NCAL President and CEO Mark Parkinson promised members that the organizations would continue lobbying to ensure that long-term care residents and employees are considered the highest priority to receive the vaccine against COVID-19 when it becomes available.

Parkinson praised providers for persevering despite the “clinical nightmare” and “financial disaster” of the pandemic and despite continuing to be blamed in the lay media for the relatively high percentage of COVID-19 cases and deaths in facilities as part of the overall numbers, when research shows that disease levels correspond to levels in the communities in which facilities are located.

Demographics — the aging population — should give providers reason for hope, because it indicates an increasing need for long-term care, Parkinson added. “We will get back to where we were,” he said. 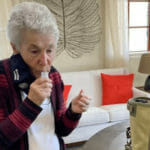