With the possibility that President Biden’s $1.9 trillion stimulus bill could come to the House of Representatives for a vote as early as today, senior living industry leaders are sounding the alarm that the federal government is “abandoning and failing” older adults and their caregivers. 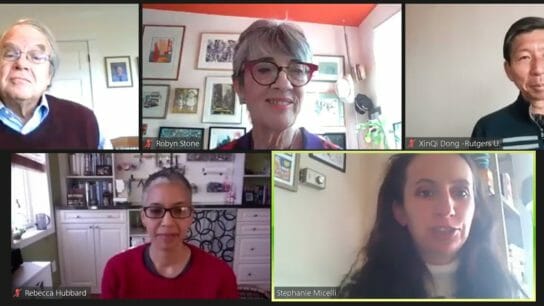 Dementia care report should be ‘catalyst for change,’ committee says

An ad hoc committee from the National Academies of Sciences, Engineering and Medicine produced a report on how to move dementia care forward by focusing on the well-being of individuals with dementia and their caregivers. Working to “ensure a constructive, future-focused action plan to promote smart approaches to quality in assisted living and memory care without federal regulations” is a priority for LeadingAge this year, the association recently announced.

Nineteen senior-level women working in senior living or skilled nursing are being recognized today as Hall of Honor inductees into the McKnight’s Women of Distinction awards program for 2021. To mandate or not to mandate? That is the COVID vaccination question for some senior living providers

Some senior living operators are instituting mandatory COVID-19 vaccinations for employees, but others are weighing their options.

Seventeen women working in senior living or skilled nursing are being announced today as Rising Stars and will be feted May 18 as part of the third annual McKnight’s Women of Distinction awards. LeadingAge is stepping up calls on Congress to adopt a COVID relief package addressing the dangers that the pandemic poses to senior living residents and other older adults. Not here, not us: Internal vaccine campaign allows senior living community’s residents to ‘get their lives back’

A few weeks out from the one-year anniversary of one of the earliest clusters of COVID-19 in the country, a Louisiana life plan community operator is looking forward to letting residents “get their lives back.” Number of operators investing in video conferencing capabilities for residents has quadrupled since 2018: survey

Three-fourths of senior living and care providers invested in video conferencing capabilities for residents last year, quadrupling the number of providers who did so just two years earlier, according to a new Ziegler CFO Hotline survey conducted in partnership with the LeadingAge Center for Aging Services Technologies. Survey results also suggested that spending for telehealth and telemedicine technologies also doubled from investments made two years ago.