From watching pets to monitoring children, the commercial visibility of devices that observe in the name of care has exploded with the expansion of internet-connected home surveillance products. The use of these cameras in long-term care resident rooms is not new, but public interest in the topic is renewed periodically when the media highlight a disturbing case of abuse captured by a hidden camera in a resident’s room.

A few states have guidelines but no law; California, for example, has guidelines for facility-initiated camera use in assisted living, and Maryland has guidelines for nursing centers if they choose to allow individuals to install cameras. The use of cameras in resident rooms is not prohibited in the absence of state law.

Policymaking in a vacuum?

Many in the industry recognize older adults as a vulnerable population in LTC settings, and they recognize that certified nursing assistants work in physically and emotionally difficult jobs for which they are underpaid, generally undertrained and undervalued. These are the two parties placed under surveillance by cameras, and neither is likely to be a decision-maker when the question of camera use arises.

Policymakers, facilities and family members thus carry a heavy responsibility to understand the nuances and consider all consequences of camera use in residents’ rooms. And yet, after nearly two decades of policymaking on electronic monitoring, it may come as a surprise that virtually no research exists on the use of resident-room cameras to detect or deter abuse in LTC facilities. (Several published studies focus on resident-on-resident abuse and the use of cameras in falls analysis; see the links at the end of this column for additional information.) Legal scholars have evaluated the issue of cameras in private rooms, and some ethicists have weighed in, but they have little research to support their arguments.

To address the problem of policymaking without the benefit of research, we start with asking questions. When I talk with resident and legal advocates, they say that they want to see evidence of the positive effects of cameras — namely, less abuse, protected staff, better care and reduced theft and loss. They also want to know how potential negative consequences such as privacy invasion, interference in intimate care relationships, trust, misuse of the camera feed, staff retention/recruitment difficulty and excessive litigation play out in practice.

Why do we have so little research to help guide decision-making? In the United States, no data collection mechanisms exist to learn which facilities or which residents have cameras in use. We have facility deficiency data and resident outcomes, but without information about actual camera use, it is impossible to learn about any relationships.

As a first step, researchers at Brown University conducted an eight-question, anonymous online survey to learn about nursing center and assisted living policies and current use of cameras in resident rooms. The survey was distributed electronically to members of the American Health Care Association and National Center for Assisted Living.

Because the survey was so widely distributed and anonymous, we are unable to calculate a response rate, which means that we don’t know how survey respondents are similar or dissimilar to those who didn’t respond. We can say that 16% of the facilities that responded have at least one camera in use now, but we can’t say that 16% of facilities nationwide do. The survey does, however, draw out important opinions and experiences of people with practical knowledge of the issue.

More than half of the 228 completed surveys represent nursing centers, about 25% represent assisted living, and 20% are a combination of both. Staff from facilities of all sizes responded in roughly equal numbers, with slightly more responses from staff in facilities with more than 120 beds.

What have we learned?

One-fourth of the respondents report that their nursing center and/or assisted living community allows family members to install cameras in resident rooms, but not all that allow cameras have any cameras in use. Sixteen percent of all facilities, regardless of their camera policy, report at least one camera in use. The majority know of only one to three rooms with a camera.

About half of the 75 facilities that either allow cameras and/or have a camera in use do not require notification of a camera’s presence, such as a sign alerting staff. This means that in these facilities, visitors and staff may not be aware that a camera is capturing their interactions. 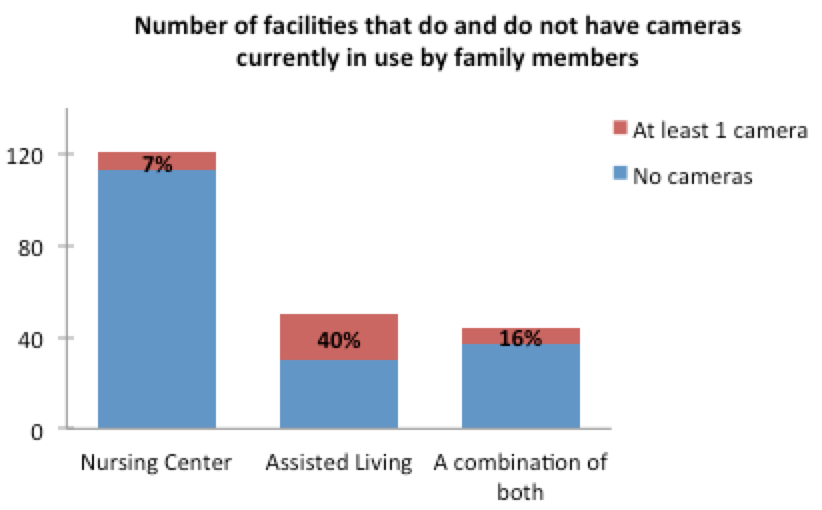 When we look only at assisted living community responses, we see that a far greater proportion has cameras put in place by family members compared with nursing centers. Ten percent of all types of facilities report that the facility has ever initiated camera use.

Respondents were invited to write in both concerns and potential advantages. The most common response by a significant margin is that cameras in resident rooms violate resident, roommate, staff and visitor privacy and could undermine resident dignity, given the personal nature of care and likelihood of exposure.

Here’s one such comment: “Is this really what the resident would want to have recorded about themselves? Many of the residents have dementia, so how do we ascertain if this is what they would want or not want? Does the family have the right to insist? The resident’s dignity may be violated by their own family.”

Another frequently asked question relates to how a facility can ensure that permission by all roommates is given when the facility isn’t notified of the camera.

The second most commonly expressed opinion is that cameras, on the one hand, would be helpful for investigating complaints and allegations, potentially protecting staff. On the other hand, many think that cameras will fuel improper litigation, that the camera feed is vulnerable to selective editing and that interactions captured could be taken out of context or misinterpreted.

Respondents also frequently noted that cameras could be used by facilities, not by family, to monitor the quality of care, to catch inappropriate behavior and to provide feed for use in trainings. Others thought it could keep staff vigilant, “on their toes” and in compliance with proper procedures because they are aware they are being surveilled. Some spoke directly of the potential to deter abuse or theft.

Respondents also wrote that cameras would have a net negative effect on staff. As one said: “I feel it would really negatively affect the relationship-building that we try very hard to promote with person-centered care.”

Concerns include a chilling effect on interactions, sending a negative message about mutual trust, adding undue pressure, making people want to work elsewhere and demoralizing dependable and honorable staff. Potential for problems with video security and misuse also were listed as concerns.

Some wrote that cameras could help document and explain falls and document behaviors to inform family members, whereas a handful of people thought facilities could use live monitoring to prevent falls. Others noted the benefit of putting family members and residents at ease. For example, one person wrote: “The few who have installed cameras were because Mom said people were stealing, coming in at night and other normal paranoid behaviors for advancing dementia. They quickly see that it is only in Mom’s mind and become less adversarial toward the community.”

Another respondent asserted that “installation of a camera recording the most private spaces is the very definition of institutionalization,” which is a sentiment with which others agreed. Interestingly, some likened cameras in resident rooms to restraints and suggested that lessons can be learned from that history.

The difficulty of fully predicting how technology changes care and relationships is well-known. Research can help. This survey reveals that a large minority of nursing center and assisted living respondents are aware of cameras in use in resident rooms. Most believe that privacy is at stake, and many envision potential positive effects. Clearly, this issue carries a full range of potential positive and negative implications for multiple parties.

Researchers of technology and society have long challenged the notion that technology is value-neutral and somehow separate from our human and social world. They argue that we are naïve to believe that technology designed by humans for human purposes could enter a social relationship — in the form of a surveillance camera or any other — without influencing the nature of that relationship and the people involved.

The short, anonymous survey is still open. We encourage facilities to take two minutes to contribute to our understanding of this issue by participating. We ask that each facility complete only one survey, please.

Clara Berridge, Ph.D., M.S.W., is an Agency for Healthcare Research and Quality postdoctoral research fellow at Brown University’s Center for Gerontology and Healthcare Research in the School of Public Health. She received her Ph.D. in social welfare at the University of California, Berkeley, and her M.S.W. from the University of Washington, Seattle, where she will return as an assistant professor this fall.

Additional reading on the topic of camera use in long-term care:

Video capture of the circumstances of falls in elderly people residing in long-term care: an observational study

The nature and use of surveillance technologies in residential care