A resident of an assisted living home in Alaska has been changed with murdering a woman who cared for him.

The Anchorage Police Department reported that Gilbert Nashookpuk, 25, called the department at 12:05 a.m. Saturday morning to say he had “strangled, kicked and punched” to death his caregiver, Glenna Wyllie, 57, about two hours earlier because she “had made him angry.” Nashookpuk said he hid Wyllie’s body behind a freezer in the basement of the Eye to Eye Assisted Living Home and then left on foot, according to the alert posted online. 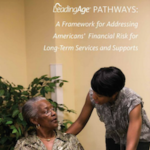 A sneak peek at Pathways findings