It’s been a little more than two years since nonprofit health system ProMedica’s $1.4 million acquisition of Quality Care Properties tenant HCR ManorCare and Arden Courts, through a joint venture with Welltower. Although many financial experts were skeptical of the deal at the time, given ManorCare’s bankruptcy filing earlier in 2018, the move appears to be paying off for ProMedica, according to an article Friday in Modern Healthcare.

ProMedica’s leaders told the media outlet that they knew buying ManorCare could mean sacrificing their debt ratio and perhaps even their credit ratings in the short run. And indeed, all three rating agencies have since downgraded the firm, citing its debt ratio. The trade-off, they noted, was made in service of a larger, multipronged strategy that’s beginning to bear fruit.

Despite a global pandemic, ManorCare appears to be a stable component of the health system’s operations. In the first half of 2020, ManorCare, which now makes up almost half of ProMedica’s revenue, posted a 7.7% operating margin, boosted by $156 million in federal stimulus grants. That’s compared with a -1.9% margin in ProMedica’s provider division, which drew $84 million in federal grants.

Even before the pandemic, ProMedica’s senior care division posted a 2.4% margin, compared with 0.4% in its provider division and -3.9% in its insurance division.

Much of ManorCare’s success likely stems from the vision behind bringing the two firms together, said Steve Cavanaugh, chief financial officer of ProMedica. The deal transformed the previously for-profit ManorCare into a not-for-profit subsidiary of ProMedica and allowed the firm to build greater partnerships with ProMedica hospitals, Cavanaugh said. ProMedica’s senior care division also is in partnership talks with a handful of other health systems around the country.

“ManorCare as a standalone company would not have been able to have those kinds of conversations and get to the finish line on them,” Cavanaugh said. 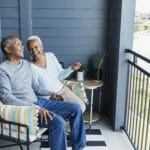